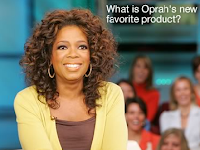 Leave it to Oprah Winfrey. She's already changed what people read. Now she's out to change how they read by giving Amazon.com's e-reading device, Kindle, her coveted endorsement.

Oprah's official announcement came today on The Oprah Winfrey Show, although for several days now Amazon has been teasing the big news on its home page.

Amazon has been excruciatingly tight-lipped about who's been buying Kindle and how many units it's managed to sell. The consensus among technology commentators seems to be this: since its debut last November, Kindle has found its way mostly into the hands of older, gadget-savvy early adopters who don't mind dropping $350 on a stand alone mobile e-reading device.

Given how few people I've actually seen with a Kindle, I'd venture to say this is a rather small cadre indeed. Significantly, all but one of the Kindle users I've observed over the last year has been male.

In other words, Winfrey's endorsement could prove to be a real game changer. She has enormous reach among women between the ages of 18 and 54. That, combined with the Oprah Book Club, makes her an extraordinarily influential figure with exactly the population that purchases the most books in the United States.

The real challenge, it seems to me, will be for Winfrey to persuade her audience to part with a large chunk of cash during a major economic downturn. Amazon's decision to offer a $50 "Oprah Winfrey" rebate--about 15% off of Kindle's retail price--will be a major incentive in this regard. (By the way, the rebate also happens to be a smart way for Amazon to move its existing stock of Kindles to make way for generation 2.0.)

The other challenge will be for Winfrey to convince her audience that what makes a book a book are its words and images, and not its physical form. That could prove to be an even harder sell in the long run. As Jeff Gomez has observed in his book Print is Dead, it's hard for many people to shake the image of books as things made of paper, ink, and glue, which they're supposed "to hug...in bay windows on autumn days, basking in the warm glow of a fireplace with a cup of chamomile by their side."

The genius of Kindle is to marry e-reading with on-the-go book distribution. Its downfall thus far (beyond the concerns I've raised about its interface and matters of privacy) has been Amazon's apparent inability to connect the device with less gadget-inclined book readers. And in this regard, Oprah's endorsement of Kindle can only help bring e-reading to within eyeshot of the mainstream.

I'm always intrigued with how some people react to the use of cliches. I care to think them as tropes or "commonplaces" that allow for speedy recognition and identification.

The Late Age of Print: Everyday Book Culture From Consumerism to Control » Buy from Columbia University Press
» Buy from IndieBound
» Buy from Amazon.com
» Buy from Powell's